Yesterday Joey spent the day in the North East towns of Sunderland and Seaham, ahead of the War Horse run in Sunderland next February.

He visited the iconic Roker Pier and then met the Tommy of Seaham built by Ray Lonsdale, who was built in 2014 to remember those lost in WWI.

Michael Taibi, one of the puppeteers, said: “We had a fantastic response at Tommy and Roker Pier, seeing people’s reaction to Joey for the first time just never gets old. It isn’t about us, we work together to make him come to life and the greatest compliment people can make is when they say they forgot we were there, as that shows we’ve nailed it and done our job.”

After a morning taking in the sites, Joey featured in a Q&A event at Sunderland Empire, attended by invited groups and schools.

War Horse will be playing at the Sunderland Empire from 6-23 February 2019. Tickets are on sale now. 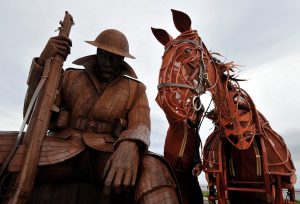