War Horse will be one of the National’s biggest ever hits,” one critic shrewdly observed when Michael Morpurgo’s 1982 novel made its theatrical debut in October 2007 – a leap in medium the author had first dismissed as mad.

Since then, and the rapturous reception with which it was greeted, the First World War-set production has globe-trotted with the pounding might of an Aintree winner. It was an award-showered hit on Broadway, successfully adapted in China, a visitor to Tokyo; and it earned its spurs anew, in a symbolic moment of reconciliation, in Berlin.

The space can hold up to 2,000 spectators, though here it’s configured to offer a similar number of seats (around 1,300) to the Olivier. It’s worth noting that Peter Pan, another NT “family show”, flopped when it was remounted at the Troubadour’s sister venue in White City in the summer, closing two months early. But War Horse is of a different order. It never stales, or fails to induce tears, on repeated viewing. It has, yes, the X factor.

All in all, more than 8m people have encountered the show – two million short of the estimated number of military casualties from the Great War. Total loss of human life was put at around 40m; and countless contingents of animals faced the industrial-scale carnage, not just horses but pigs, pigeons, dogs and whales too. They relayed messages, calmed nerves, were even processed into munitions.

Morpurgo’s ingenious idea – inspired by conversations with aged veterans in a Devonshire village pub – was to distill the barely describable horror and suffering through the tale of a singular horsey-hero, Joey, and his wide-eyed teenage devotee, Albert, who signs up to follow him over to France after the outbreak of war. He gave us the horse’s eye view but also registered the shared betrayal: man and beast growing to shackled maturity, jointly serving as cannon-fodder.

The step taken by playwright Nick Stafford – with directors Tom Morris and Marianne Elliott – risked going over the top. Instead of relaying Joey’s experience verbally, the horse would provide the wordless centre of the tumult, his essence communicated via the puppetry of South African company Handspring.

Until it was set before an audience, there was no way of knowing how deep a connection we would feel with a chestnut-coloured construction of bamboo frames and gauze – nylon cord and bicycle brake-cable all part of the equine edifice. Yet the transparently operated device conjures all the requisite physical mass and grace, stalwart courage and vulnerability. The contraption becomes a living, breathing, stamping creature through the meticulous attention of its tireless trio of handlers (one coaxing the head and ears, while two tramp within the shanks, like sightless soldiers). The faithful dedication of Albert (a sweetly besotted Scott Miller) further lends credence to what we see but our imagination is the final crucial component, willing the skeletal form into make-believe flesh.

I remain incapable of finding serious fault with any aspect of the evening (beautifully served by tour director Katie Henry and cast), though some have, perhaps rightly, suggested that the accompanying music can err towards emotional button-pressing.

Yet whether it’s the potent (often animated) line-drawings, the jolting shocks of blinding light and booming sound, the folk-singing or simple, harrowing touches – the human scream Joey lets out when entangled by barbed-wire – it all hits home. War Horse makes poignant sense now, in the midst of November, but it’s safe to assume that it never shall grow old. 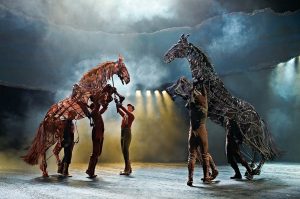