Troubadour Wembley Park Theatre is being created inside the former Fountain Studios by award-winning Troubadour Theatres. The venue will open in summer 2019, with the inaugural production – further programming to be announced.

Speaking about the announcement Tristan Baker and Oliver Royds of Troubadour Theatres said:
“We are delighted to be welcoming the acclaimed National Theatre production of War Horse to Troubadour Wembley Park Theatre this Autumn. We couldn’t think of a more fitting production to welcome to this state-of-the-art theatre. 2019 will be a hugely exciting year for Troubadour Theatres and Wembley Park as we open a brand new venue in the heart of one of Europe’s most dynamic regeneration areas.”

James Saunders, COO of Quintain, the developer behind Wembley Park, says:
“We’re thrilled about the Troubadour Theatre opening, as it adds to the growing cultural offering of the area, that already boasts Wembley Stadium, SSE Arena and Boxpark Wembley, and will be an intrinsic part of the lively new neighbourhood that is providing much needed homes to rent in North London, as well as giving Londoners more reason to come and enjoy Wembley Park.”

Councillor Muhammed Butt, Brent Council Leader, says:
“It’s been incredibly exciting to see Wembley Park’s transformation over the past few years. The Troubadour Theatre is set to be another great addition to the area, as well as to Brent’s busy arts scene. As we gear up to become the London Borough of Culture in 2020, we hope productions like War Horse will pull in audiences from across the capital, and that more and more people will recognise Brent as a cultural destination.”

Troubadour Theatres will run the brand-new theatre in Wembley Park, and will work with well-known and emerging production companies and artists to stage world-class entertainment within a flexible space, unmatched by other London theatres. In addition to a versatile performance space, Troubadour Wembley Park Theatre will also house a modern state-of-the-art restaurant and a fun, sociable bar space and an open air terrace.

Located within the historic former Fountain Studios – best known for being the venue of live televised shows including The X Factor, Britain’s Got Talent and Pop Idol – the new theatre will be in the heart of Wembley Park, an area that is fast becoming one of London’s most lively new creative districts, with affordable artist studios in addition to the sporting and musical events for which the area is internationally known.

Troubadour Wembley Park Theatre will be a fully flexible theatre; a space that can be transformed to suit the requirements for every show – traditional proscenium arch theatre, in-the-round theatrical experiences, or immersive shows. It will encourage theatrical producers to think big, offering them an affordable alternative space to present bold and ambitious shows.

The Troubadour team has extensive experience of running spectacular theatres including the King’s Cross Theatre which consisted of two 1,000 seat theatres and one 450 seat studio housing the Olivier Award-winning production of The Railway Children, Lin-Manuel Miranda’s In The Heights, David Bowie’s Lazarus and the Donmar’s Shakespeare Trilogy.

This will be the first theatre to open in Wembley Park and first venture between Quintain, the developers behind the transformation of Wembley Park, and Troubadour Theatres, providing a new cultural offering for those living, working and visiting Wembley Park. 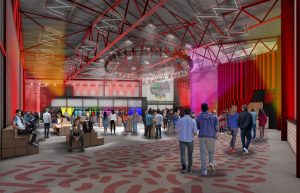