Last week, our social media fans submitted their questions for War Horse author Michael Morpurgo, read on to discover his writing inspirations and thoughts on the play.

Q. Who was your favourite author when growing up?
– Asked by Jane Baker

A. Robert Louis Stephens and my favourite book was Treasure Island – what annoys me is that he wrote it first – but I wouldn’t have written it as well.

Q. Which do you regard as the best book you have written?
–Asked by Mary Gosney

A. Who knows? You are the better judge of that. It could be War Horse, or Farm Boy or Private Peaceful or Listen to the Moon. I’m not the best judge.

Q. Before you wrote War Horse had you had much contact with horses in your life?
– Asked by Samantha Jones

A. Yes. I rode for a bit, and was very good at falling off. Clare, my wife, and my daughter Ros loved riding. I mainly mucked out and groomed the horses a lot.

Q. What made you write a story about a horse?
– Asked by Chloe Tomkins

A. I was fascinated by the relationship, the trust and the affection that I saw there was between people and horses.

Q. How did you research before writing War Horse?
– Asked by Violet Moon

A. I would never have written War Horse had I not met three old men in my village who had been to that war. They were my greatest sources for research.

Q. What is your favourite scene in the book and why? How do you find that this scene is played in the theatre?
– Asked by Niek de Bruijn

A. The meeting between the German soldier and the British soldier in no man’s land when they toss a coin for Joey. It is played wonderfully well in the theatre, it’s a moment of great hope after all the tragedy we have witnessed.

Q. How did you feel/react when you saw Joey on stage for the first time?
–Asked by Betty

A. Amazed as was everyone else that a creature so obviously made had somehow been filled with life. Like everyone else I found Joey has a different sort of a life from a real horse. He is not a pale imitation but rather a wonderful interpretation of the spirit of horse.

Q. If you had the chance to perform in the War Horse play, would you take it? And which role would you want to play?
– Asked by Rhiannon Granger

A. I have performed in the play on numerous occasions, in the West End, on Broadway, Australia, Salford and in Canada. I even have a costume to prove it. I was a farmer in the auction scene and was allowed to say two words; ‘ two guineas’ – thankfully I didn’t forget them!

Hear more from Michael Morpurgo in our Page to Stage video interviews. 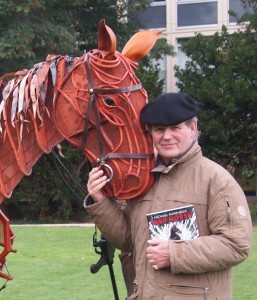 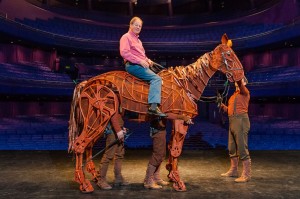