2020 has begun with our Australian leg of the tour, opening at the newly refurbished Regent Theatre in Melbourne. Prior to the cast arriving, the Resident Puppetry Director, Gareth Aled and Goose did a whistle-stop around some key landmarks of Sydney, including the Sydney Lyric Theatre (where the show will be playing from 15 February), Sydney Harbour Bridge and Centennial Park. They also featured on ABC Breakfast News and Studio 10.

The show was met with brilliant reviews in Melbourne. Here are some of the highlights!
★★★★★ ‘A marvellous ride.’ – Sunday Herald Sun
★★★★ ‘A ground-breaking achievement of theatrical craft that stands ready to conquer a fresh audience.’ – The Age
★★★★ ‘War Horse is frankly unstoppable.’ – Time Out, Melbourne
★★★★★ ‘War Horse dazzles audiences with phenomenal puppetry and a deeply moving story.’ – AU Review
★★★★★ ‘Every person in the audience is so, so lucky to be a part of it.’ – Theatre People

We have now moved to the Sydney Lyric Theatre, where we will be playing until 15th March. Again, the show opened to excellent reviews in Sydney. People across Australia also got an insight into the show last Friday as they were introduced to Goose and Joey on live TV during Sam Mac’s weather crosses on Channel 7’s Sunrise programme. 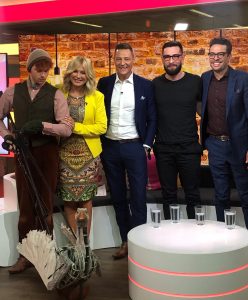